Jay Holtslander is the Technical Director at Skunkworks Creative Group. Prior to joining Skunkworks he was a CompTIA certified owner/operator of an I.T. services firm, and more recently founded Canada's first PCTIA accredited coding school. Jay's has been working with the internet since 1995 and his first computer was a Tandy TRS-80 Color that had cassette tapes for a hard drive.

Disruptions happen when traffic can’t reach its destination. Or if details are not matching.

If you’ve experienced a service disruption in the past related to a Nameserver change, it’s was likely due to one (or more) of these reasons:

It may take the entire Internet up to 48 hours to be informed that "New Nameserver" has been designated as authorative. Until that 48 hours has passed some requests may still pass through "Old Nameserver" but the traffic will get through to it’s intended destination either way.

Downtime during a Nameserver switch

Traffic flows either through "Old Nameserver" or through "New Nameserver" similiar to how a light switch is either on or it is off.

The time in between the two states (if measured) would likely be in the billionths or trillionths of a second. For this reason we can say that basically there is zero time in-between states.

Allow up to 24 hours for this change to be processed. There will be no downtime when you switch your name servers. Traffic will gracefully roll from your old name servers to the new name servers without interruption. Your site will remain available throughout the switch. 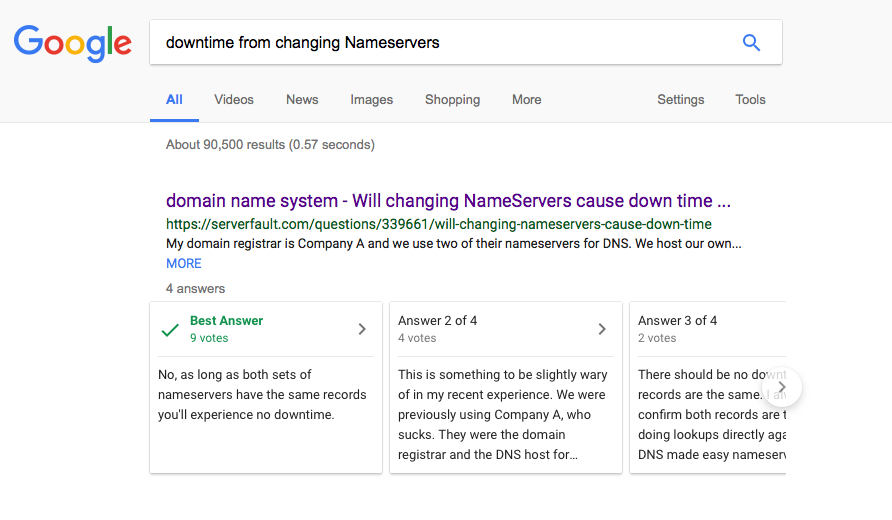 Imagine a car on a 2 lane highway into a city. Both lanes of the highway are going to the same destination.

Now if the new lane had a giant crater in it, the car would definately have a problem. But since the driver visually checked the new lane for craters before putting on the turn signal, the driver can proceed safely.

Skunkworks has succesfully migrated Nameservers without any downtime from the following providers in the past.

Remember: Mail servers will also re-try on connect/DNS failure so you aren’t likely to miss any emails during some tiny window.